At GDC 2013, Award-winning ZombiU writers Gabrielle Shrager (story design director, Ubisoft Montpellier) and Antony Johnston (New York Times best-selling graphic novelist and games writer) retraced the steps that led from 'just another zombie shooter' to a game rich with mythology, backstory, and narrative. The session discussed how various design decisions affected the use of narrative in the game. 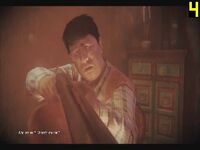 The concept of Permadeath completely influences narrative designs, because of the consistant changing hands of characters. Once a character is bitten, they are dead forever. One of the main narrative problems came from crafting a 20 hour story that can be told through the eyes of several silent protagonists, and this is without repeating any events, no repeated cutscenes, and no replaying of any gameplay sections.

The survivor notebook was used to 'carry the torch' of information to each new player.

The player is both the actor AND witness.

Narrative was simplfied into three aspects:

Man vs Nature  - The character fighting the undead.

Man vs Man - The character fighting other living humans.

Man vs Himself - The character fighting hopelessness. 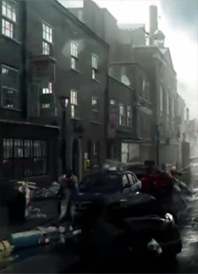 Tie the story into History. Began with the idea to end the game with the city being firebombed. The Great Fire of London 1666 was an immediate parallel. Then, there is The Great Plague of 1665. The fire was a mixed blessing, halted a massive outbreak of plague. London is strongly associated with secret organizations, and this lead to the backdrop of prophecy.

Once the setting was decided, the backdrop of a zombie apocalypse was formed on the basis of incorporating the history of the city. Create a new secret society based on real-life components, The Ravens of D, utilize the real life predictions of John Dee to provide a realistic backdrop. This avoids the Zombie-Medical virus, a commonly used trope.

This element is unique to the game's property, consider the game as a 'beat your own score". A unique solo experience that creates a benefit of interaction through the online message leaving system. The fight to do better, the creation of a deadly relay race.

Focus the fight of surviving longer than the previous time, or with less resources. This provides a persistance in storytelling, that is directly tied to the elements of gameplay.

Retrieved from "https://zombiu.fandom.com/wiki/User_blog:TheBlueRogue/Creating_the_Narrative_of_ZombiU?oldid=5777"
Community content is available under CC-BY-SA unless otherwise noted.